We all have them, a favorite ring, grandma’s old jewelry, or just a big box of “stuff”, just laying around never being worn or even taken out of the jewelry box. It’s a shame to have such potential beauty laying around not being enjoyed and that’s where remaking a ring, or other piece of jewelry can be a real thrill.

We want to show you how a ring that had previously been all but destroyed can be brought back to life and continue to give you years of enjoyment. This white gold ring came to us with all of the stones brutally hacked out of it with a saw. It could have been an old piece of grandma’s jewelry that someone cut up, or maybe the diamonds were removed to be used in something else, we don’t know. What we do know is that they were simply hacked out instead of being carefully removed. From these pictures you can see the damage that was done, but you can also see what was once a great looking ring, even though it is worn and the engraving is beginning to fade. 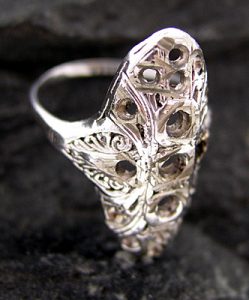 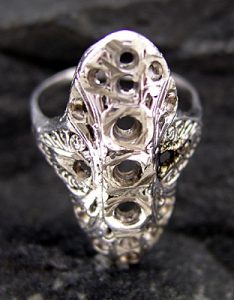 We decided that the best thing to do with this particular ring was to clean up the surface of the ring and then set garnets into the holes already existing in the ring. To clean up the ring we went to our laser and added 18k gold to the ring. In the past the only way to add material to a ring like this was to simply fill it with gold solder and polish it out, a practice that some shops still use. By using a laser we can take 18k gold (or any matching metal) and fuse it to the original ring to build up the damaged areas. Once built up the ring is then sanded and re-polished to give us a clean base to work with. In these pictures you can see the cleaned up top of the ring and one of the garnets already set in the ring. 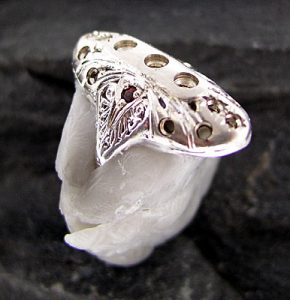 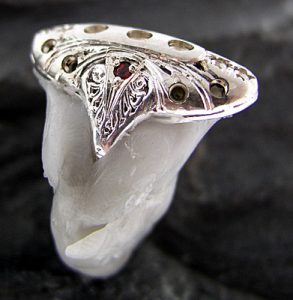 Once the ring is welded up and polished it’s time to set the stones. Since all of the prongs and beads were removed from this ring before we were chosen to restore it we didn’t have any metal left to work with for setting. The decision was made to set all of the stones flush with the ring and create new beads to set the garnets. Garnets were chosen instead of replacing the missing diamonds because this ring became a birthday gift and garnet is the recipient’s birthstone.

Now that all of the stones have been set, our staff re-cut the engraving that was left on the ring to sharpen up the image. Other parts of the ring were engraved to help blend the repaired areas back into the original areas of the ring. As you can see in these last two pictures, you would never know that the ring had every been damaged once we have finished. 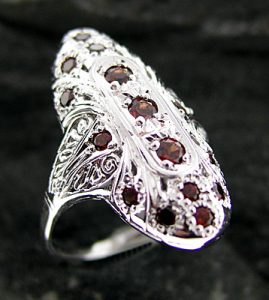 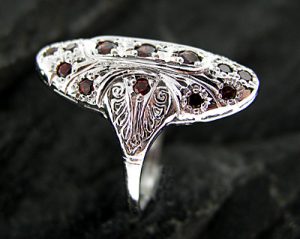 Jewelry tends to have significant emotional attachment to it. And when damaged, through accidents, neglect, or even purposeful attack, it can be very distressing. Using the skills learned over years of practice and combining them with the latest technology available we have been given the opportunity to breathe life and joy back into these pieces of precious custom jewelry.